Castles represent the most important Slovenian cultural heritage. Their origin dates back to the Middle Ages. Castles were built on spots that are difficult to access. Short climbs to these places will pleasantly enrich your cycling tour. Each castle tells a story of its former feudal power. On tour you will learn about the medieval life and ride on the so-called castle road. The Sevnica castle complex offers a display of its rich tradition. With baron Moscon and his company you will be able to return to the times of knights and princesses. Baroque frescoes will lead you through the four seasons. Rajhenburg Castle is the oldest asserted castle in Slovenia. The ascetic and very progressive Trappist monks left a special mark on the castle. Did you know that monks were not allowed to talk to each other? They used sign language to communicate. Their chocolate was enjoyed even by the Imperial Court in Vienna. The calm and long valley of the Brestanica creek is one of the most beautiful little valleys in Posavje. Its shade is welcomed in the summertime heat. Podsreda Castle hides a preserved black castle kitchen where they occasionally still light beech firewood. It is one of the few monuments left from the Romanesque period. Its rich life is a mix of Romanesque heritage and contemporary art. Above the castle road in the Vranske pečine Forest Reserve, you will be welcomed by rocky Pavlek (Pavlek Cliffs) with a wooden stir and spoons in his hand. According to the legend, he cursed the sun. Svete gore is one of the most famous pilgrimage destinations in Slovenia. St. Mary’s church and four chapels reveal the rich history and powerful energy of the place. At the Bizeljsko Castle, you will be greeted by a kind lady of the manor. You will never forget the view from her balcony across the Sotla valley. Whose legs are dangling from the ceiling of the castle chapel? Grab your bicycle, castle legends will take you back to the times of chivalry, nobility and troubadours. 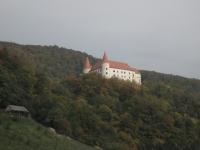 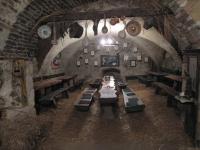 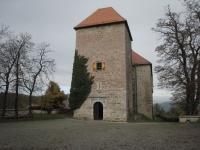 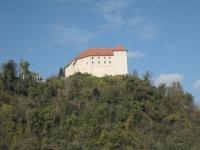 EXPLORING THE HILLS OF DOLENJSKA

We begin our cycling tour at the restaurant Gostišče Felicijan where the Mirna River flows into the Sava. How long it must have taken the Mirna River to create such a deep valley with such steep slopes through the hills of Zasavje? Before Jelovec, where the valley is narrowest, the river created two long meanders and later people built two railway tunnels. Not long ago, people did not travel these valleys because they were impassable or too dangerous.

Let us continue on through the hills of Dolenjska which have a rich tradition. Everything in Krmelj reminds us of its rich 150-year mining past. The spirit of the cave dwarf called Knapec (little mine worker) is still present in the area. Did you know that mining settlements have no churches?

We pedal onwards along the uneven terrain of the Mirna valley all the way to Mokronog. The ruins of a castle and the hill Žalostna Gora reflect how great this place was in the Middle Ages. Down the long valley of Laknice we can let the pedals turn on their own.

Then we ride through Čelevec to Klevevž where the Radulja Creek formed an impressive gorge with smaller waterfalls. Here we can also see the ruins of a castle. In summer we can take a dip in the hot spring Klevevška Toplica.

We cycle on through the Radulja valley to Škocjan, where the softness of the Dolenjska region and the homeliness of the countryside create magnificent images all year round.

We cross a motorway in Dobruška Vas and continue along the vast valley of the Krka River. Then we cycle between the hidden meandering Krka River and a large lowland complex of oak forests which partly is also an old-growth forest.

In the village of Malence, we are astounded by the mighty Cvelbar oak tree. Kostanjevica na Krki is the smallest town of Slovenia and it is the only one situated on an island. Because of its many wooden bridges, it is also called the ‘Venice of Dolenjska’.

We continue along the undulating landscape along the right bank of the Krka River. Because the Krka does not carry gravel, its banks are very lush and cut into the fertile plains along the river. In summer, almost every village has its own swimming area. In Bušeča vas, we can refresh ourselves in the thermal water of the small spa Klunove Toplice.

In Cerklje ob Krki, we cross a bridge over the Krka River and go uphill to Čatež at the confluence of the rivers Krka and Sava. We are offered a scenic view of Brežice and Terme Čatež Spa which offers the largest thermal water paradise in this part of Europe.

Passing the only preserved wetland of the Sava River in Posavje, we cycle to the Croatian border. To the right, under the foothills of the Gorjanci, we can see the beautiful Mokrice Castle. After the sun sets, the shadows of the wetland legends and the impish Čatež Dwarf sneak behind the castle walls. 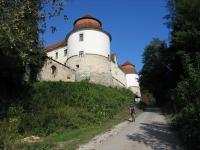 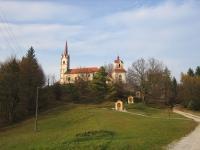 In Radeče, the beginning of the Posavje (Lower Sava) region, the Sava River breaks through the narrow valley of Zasavje (Central Sava region). Freed of steep banks, it created several meanders on its way to Krško. Hardworking people built hayracks on the fields of its embankments. Right before Krško, the river was narrowed by the Krško Hills. Across the vast Vrbina, right before Brežice, Sava could freely overflow and fertilize its banks for millennia. Already in the times of Maria Theresa, after massive floods, they placed Sava into an artificial riverbed. However, with building hydro power plants and reservoirs in Posavje, we have even stronger interfered with its natural current. Sava was used for freight trafficking until World War II. The people of Šmarčna, whose village stands on one of the most beautiful Sava meanders before Sevnica, were known as »Kavsarji«, since they were chasing floating timber on Sava with special hooks called »kavsi«. Rafting on Sava has a long tradition. The timber was rafted all the way from the Danube to Belgrade. When transporting goods upstream from Brežice upwards, people used draft animals for which they built a special tow path. The river rafting died away with the construction of the Austrian Southern Railway. Rich historical heritage of rafting is being preserved in Radeče with an annual event called The Days of Sava Rafting. The construction of power plants also brought new paths along the series of Sava dams, which are a couple of kilometers long and suitable for a pleasant bicycle trip. You may calmly and with wind in your hair ride to Brežice, without worries of getting lost. 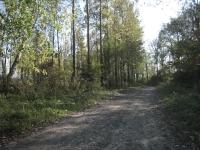 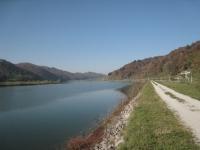 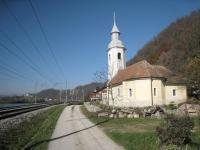 This cycling route takes us along the borders of The Municipality of Sevnica. The diverse hills of Posavje can be experienced by bike while enjoying the beautiful scenery. The entire circular route is geographically divided into two parts, just like the Sevnica Sausage. The thought of this sausage and its delicious distinctive aroma will accompany us thoughout the entire tour.

The northern sausage runs along the left bank of the Sava River and crosses the valley of Sevnična River while the southern one runs along the right bank and crosses the valley of the Mirna. How do we eat an entire sausage? We cut it into smaller pieces. Just like that we will also do our 100km ride. We recommend a mountain bike but it is also possible to go by trekking bike. The knife to cut the Sevnica sausage into pieces or to split the route into smaller stages is offered by the accommodation providers along the route.

Why is the Sevnica sausage a true queen of sausages? Its production is based on the oral tradition of our grandparents. It is made according to the classic method of processing of pork and beef from animals that grazed on the pristine meadows of Lisca and Bohor and along the Mirna and Sevnica rivers. We will visit all those places on our tour. Choice cuts of meat with dried spices, salt, pepper, garlic, without other additives, stuffed into a natural sausage casing made from pork intestines provide a genuine home-made taste. The finishing and smoking with beech chips, which gives the typical aroma and colour of the Sevnica sausage, are extremely important.

The northern part of the sausage takes us from the bar Trubarjev Hram in Loka to Lovrenc, known for being a natural habitat of gentian (Gentiana clusii). If you want to experience Lovrenc in its full blue beauty, you have to make this tour in late April. Around the top of Kamrica, we head uphill to Lisca, the highest point of the route. In nice weather, the view reaches all the way to the Alps. From here we can also see the entire Sevnica sausage route. Do you feel like eating sausage yet? We ride down the Sunny Road to the right steep ridge of the Sevnična River on which we will ride along a scenic trail. The fields of this area required a lot of hard work not that long ago. Everything from carrying manure to harvesting crops was done with a basket. We continue our path over the western slopes of Bohor to Ajdovski Gradec which is one of the better researched late antique settlements in Slovenia.

We close up our sausage over Žigarski Vrh in Blanca and continue the southern sausage along the valley of the stream Štagine to the slopes of the hills of Dolenjska. The trail will be marked by colourful landscape mosaics of forests, meadows, orchards, and vineyards. The hard working inhabitants of Dolenjska give these places their soul. We must not overlook the natural amphitheatre in Malkovec where Cviček and other quality wines are produced. In Tržišče we cross the Mirna valley and pay homage to a giant flagon. On Vrhek we can find the yellow azalea which blooms in late April. In Šentjanž we can look forward to a hearty meal in the high-end rural restaurant and organic farm Repovž. On their unique menu you can also find the Sevnica sausage. The ascent to the slopes of Orehovski Hrib awards us with a magnificent view of the Mirna River and Sopota Valley and the hill Kum. Is the Špičasti Kamen (Pointy Rock) still concealing a treasure? Through Brunk and Novi Grad, we slowly descend to Loka where we will be greeted by numerous hayracks along the Sava River. Bon appétit and have a fun ride!

Accommodation providers along the route on the right bank of the Sava River:

Overnight accommodation providers on the left bank of the Sava River: 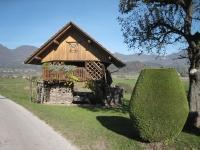 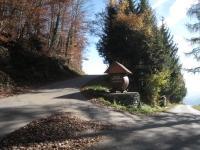 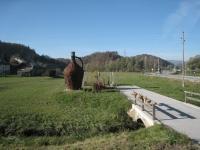 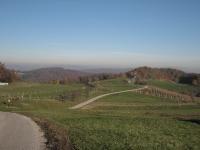 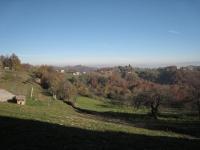